Caffeine is a naturally occurring chemical found in certain plants including cocoa beans, kola nuts, yerba maté, guarana, and the world’s most beloved tea leaves & coffee beans. But, health-conscious people need to question is caffeine a diuretic substance before using it excessively. Coffee & tea have become the major sources of caffeine intake, and many consider it as an essential dietary component to get them through the day.  It is not uncommon for people to drink between 3-6 cups of tea or coffee per day, as they find it helps them to feel better, have more energy and be able to carry out daily tasks more effectively. A cup of strong coffee or a caffeine supplement before training is also common practice for athletes and gym users to improve mental and physical performance.

Using Caffeine as an Ergogenic Aid

Caffeine is well researched as a nutritional strategy to enhance performance. To say that caffeine improves exercise performance is a simple answer to a complex question as there are many factors to consider. Caffeine can help you achieve your athletic goals. Without going into too much detail, I will outline the basic findings that support caffeine as an ergogenic aid in different sports.

Caffeine as an Ergogenic Aid in Skill Sports 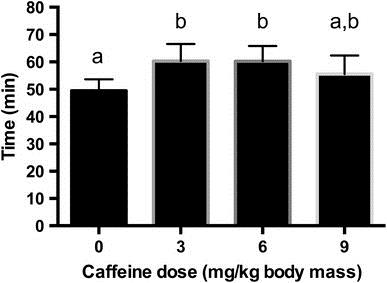 Tea and coffee are the most widely consumed drinks in the world, after water. Theoretically, caffeine may have a diuretic effect as it disrupts an important regulator of kidney function, renal water & electrolyte transport, which can stimulate urine output causing water & electrolyte loss (Rieg et al., 2005). This has led to the belief that regular caffeine intake results in dehydration and some studies have supported this theory. However, these studies report a range of caffeine forms and doses in populations who do or do not regularly consume caffeine-containing beverages. Together, these data suggest that high doses of caffeine (>500mg) can increase urine volume in caffeine-naïve (non-regular consumers) individuals, but low to moderate doses (<250mg) do not induce a diuretic effect.

Caffeine is well proven to improve athletic performance when taken in doses of 3-6mg/kg body mass 30-60 mins before training, however you can have too much caffeine and this may cause a diuretic effect in athletes who aren’t used to it. Abstaining from caffeine for just 4 days is sufficient for this tolerance to be lost (Fisher et al., 1986).

Does Coffee Dehydrate You?

There is one particular study in 2014 that strongly supports the hydration qualities of coffee when consumed in moderation by caffeine habituated males. Killer et al. showed that consuming 4 x 200ml coffee for 3 days to give a total of 4mg·kg·body weight of caffeine, did not influence total body weight, blood markers or 24h urine volume and markers, compared to the same quantities of water.

Caffeine content is not as high in tea as it is in coffee (see Figure 1), therefore a high as 9 cups per day is needed for a safe upper intake of 450mg caffeine. Scott et al. (2004) found no difference in hydration status between drinking tea or water when climbers were at altitude, where the risk of dehydration is extremely high. Six cups of black tea per day also have no negative effects on hydration when compared to water (Ruxton et al., 2011).

Consuming caffeine in doses of 3-6mg/kg body mass 30-60 mins before endurance sports like running, cycling and swimming has been shown to improve performance. But, people consuming coffee at a higher rate may experience caffeine’s diuretic effect in severity.

Therefore, regular consumption of tea & coffee (3-6 cups per day) contributes to total fluid intake and should not be seen as a diuretic. A higher intake of caffeine (>6mg·kg), however, may cause slight dehydration by increasing urine volume, so just have 1 tsp. of coffee in your drink!. When used in a proper amount, coffee is not dehydrating. But, when used excessively, coffee can cause dehydration. 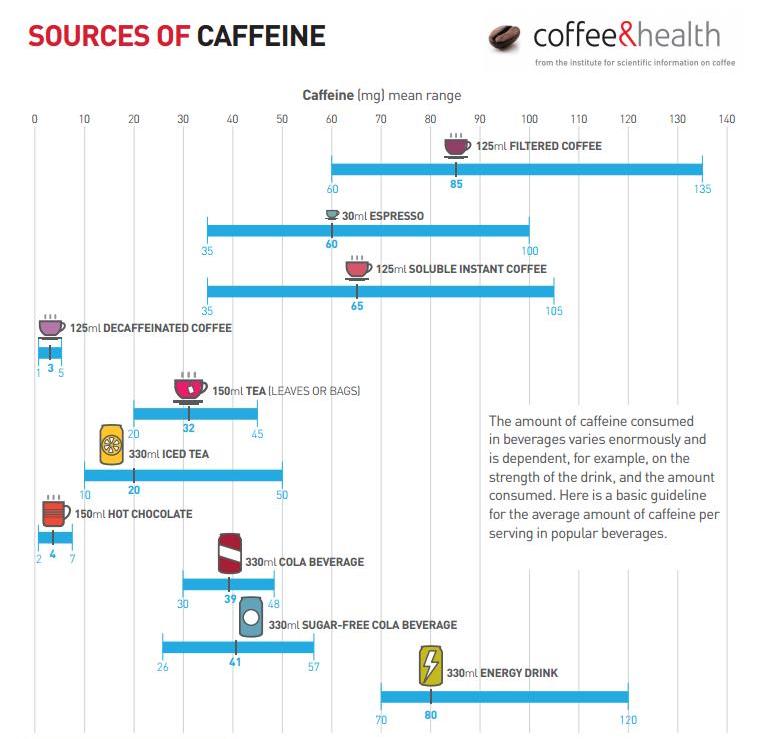 Effects of Caffeine on Your Health

Moderate intakes of caffeine consumed through beverages like tea and coffee do not appear to cause any adverse health effects in healthy people, and in fact may actually fight against the development of cardiovascular diseases and type 2 diabetes. Known side-effects include insomnia, digestive discomfort, increased heart rate and blood pressure, headaches, anxiety and restlessness, but this is due to large dosages and timings (insomnia by drinking before sleep).

On the brighter side, caffeine can offer many health benefits. Coffee and tea may also offer additional health benefits to caffeine alone, as they contain B-vitamins, phytochemicals and antioxidants, and moderate daily intakes (3-6 cups per day) can lower the risk of type 2 diabetes, cardiovasular disease, stroke and mortality.

Van Dam et al. (2006) reported that 4 cups or more of coffee was better than just 1 cup per day for reducing the risk of type 2 diabetes in younger and middle-aged women. There were also no differences between caffeinated and decaffeinated coffee, but tea consumption did not influence type 2 diabetes risk.

Moderate coffee consumption is inversely associated with the risk of heart failure, with the largest inverse association observed for consumption of 4 cups per day (Mostofsky et al., 2012). Likewise, coffee consumption does not increase the long-term risk of coronary heart disease and may even lower it in women (Wu et al., 2009).

High consumers of tea may have a lowered risk of CV disease than low/non-consumers (Fardet et al., 2014), and maybe attributed to tea’s flavonoid content and its impact on endothelial function, inflammation and cholesterol oxidation (Dwyer et al., 2013).

Rieg, T. et al. (2005). Requirement of intact adenosine A1 receptors for the diuretic and natriuretic action of the methylxanthines theophylline and caffeine. Journal of Pharmacology & Experimental Theraputics, 313, 403-409. https://pubmed.ncbi.nlm.nih.gov/15590766/

Caffeine is one of the most extensively researched supplements that is well shown to improve exercise performance. Intakes of 3-6mg/kg body mass can improve muscular endurance, function and strength, sprinting, jumping, and throwing performance, as well as a wide range of aerobic and anaerobic sport-specific actions.

Yes! 3-6mg/kg body mass caffeine has been consistently shown to have beneficial effects on running performance.

Yes! 3-6mg/kg body mass caffeine has been consistently shown to have beneficial effects on cycling performance.

How soon before training should I take caffeine?

The effects of caffeine are usually felt quickly and peak in the bloodstream 30-60 minutes after consumption from caffeinated drinks and tablets. Caffeinated gum has a faster response and can be taken closer to 10-20 minutes before.

How long do the effects of caffeine last?

Caffeine has an average halflife of 5 hours, meaning it stays in the system for up to ~10 hours, however it can range from 1-10 hours as some people do not respond to caffeine whereas others are very sensitive to it.

Coffee is not a diuretic in low to moderate doses, but in large quantities it may cause diuretic effects in people who do not regularly drink coffee. These symptoms may last a couple of hours after consumption.

Is decaffeinated coffee a diuretic?

Decaffeinated coffee will have a very little to no diuretic effect as its caffeine content is significantly reduced to approx. 7mg per cup, whereas much larger intakes of over 300mg is likely when diuretic effects may occur.

How much caffeine is too much?

Four hundred grams per day of caffeine is considered safe for a healthy adult. But, people are recommended to drink less than that. However in certain circumstances (e.g. before the competition) where up to 6mg/kg caffeine is the maximum effective dose to improve performance in athletes, can be consumed safely in a single dose. A single dose of 9mg/kg is associated with impaired performance, so you can have too much of a good thing!

Is coffee a diuretic or laxative?

Coffee is not a diuretic in low to moderate doses, but in large quantities it may cause diuretic effects in people who do not regularly drink coffee. Coffee is likely to cause laxative effects however whether it is caused by the coffee or caffeine content is unclear.

Does coffee dehydrate your skin?

No coffee does not dehydrate your skin, especially if the caffeine content do not risk a daily consumption above 350mg.

Does drinking a single cup of coffee per day have any side effects?

Drinking a cup of coffee per day is relatively safe. The only side effect could be impaired sleep quality if it is consumed later in the day before bed. It is recommended to stop consuming caffeine after 2 pm to prevent sleep disturbances

How much coffee per day is healthy?

Up to 6 cups of coffee a day can have health benefits and is not recommended to consume more than this. More will not necessarily cause serious health complications as there’s no evidence to support this claim.

Can you die of caffeine overdose?

Yes, on extremely rare occasions, people can die of caffeine overdose. But, you do not have to worry about dying by drinking common caffeinated beverages as they contain a very low amount of caffeine.